Uganda’s aviation industry is the nucleus of the country’s development, and is a pivotal link between Uganda and other countries. It is therefore the vision of this Authority to enhance its regulatory capacity for the safety and security of air transport, while facilitating optimum efficiency with respect to the movement of passengers and goods.

Unprecedented growth will continue to bring unprecedented challenges, the soon to be completed Entebbe International Airport expansion project with its extended runway and the ever expanding Domestic Aviation industry. Therefore, the sustainability of the local and international aviation industries is a concern for all stakeholders.

AIR TRANSPORT services in Uganda started with the flying boats that landed at Port Bell, Luzira at the shores of Lake Victoria, to deliver mail. This was an extension of the Wilson Airways that itself started air operations in neighboring Kenya in 1929. In 1946, the Directorate of Civil Aviation (DCA) was formed, followed by the construction of the country’s airport at Entebbe in 1947. Entebbe International Airport was commissioned by princess Elizabeth of England in 1952.

Know us better through these Downloads

“The Safest, Most Efficient and Affordable Air Transport Service”

“To Maintain the Highest Standards of Safety, Security and Service in Civil Aviation”

“To promote the safe, secure, regular and efficient use and development of civil aviation inside and outside Uganda”

We value and recognize the contribution of our customers towards development of the aviation industry.  They are the reason we exist and it is our duty to respond to their needs in a timely manner. We take pride in delighting our clientele.  We invest in our reputation. In all our relationships, quality is our signature. We always involve customers in the development of the industry.

We take responsibility for our actions and account for them at all levels.  Value for money and good corporate governance are the foundations of our decisions.  We will take the high road by practicing the highest ethical standards, and by honoring our commitments.

Ours is a team of purpose, working together towards a common goal. We know our people are our biggest and most important asset and we treat our stakeholders and partners with mutual respect and sensitivity. We are committed to an environment where everyone is a valued member, encouraged to contribute and is recognized for their efforts.

We avoid wasteful expenditure in our operations, projects and investments.  We ensure optimal utilization of resources to realize maximum output. Our passion for excellence drives us to prioritize our resources, our energies, our plans and programmes, for a better service to our clients.

We continuously devise ways and means to improve on service delivery in the aviation industry and this is what differentiates us. To maintain competitive advantage, we embrace new ideas and advancements in technology while cognizant of the fact that we live in a rapidly changing environment.

We conduct our business in accordance with the highest standards of professional behavior and ethics. Honesty and transparency are part of our development rhythm. There is tremendous emphasis on observance of sound moral principles in all our dealings.

The Authority advises government on policy matters concerning civil aviation generally and on matters regarding international conventions relating to civil aviation and the adoption of measures necessary to give effect to the standards and recommended practices of the international air transport system.

UCAA among the many functions also:

For administrative and operational purposes, the Authority is structured under five directorates:

The Directorates are under the Stewardship of the office of the Managing Director. 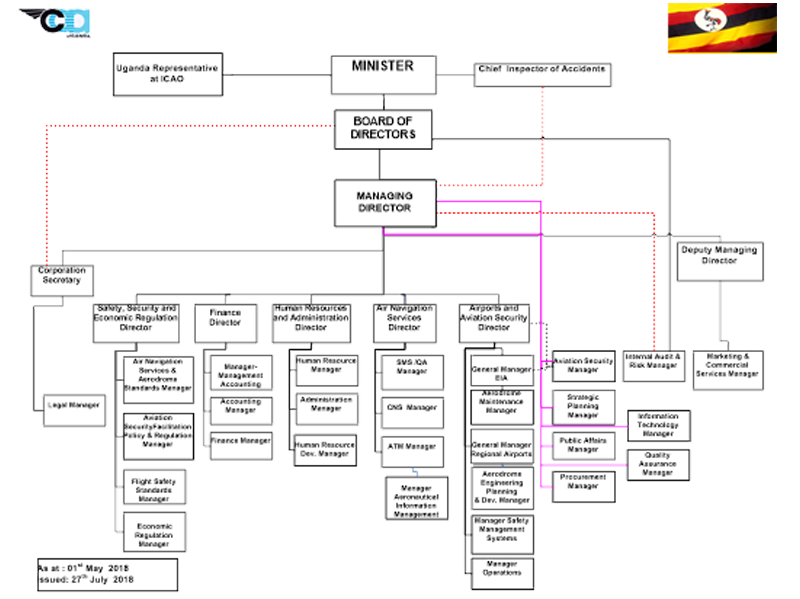