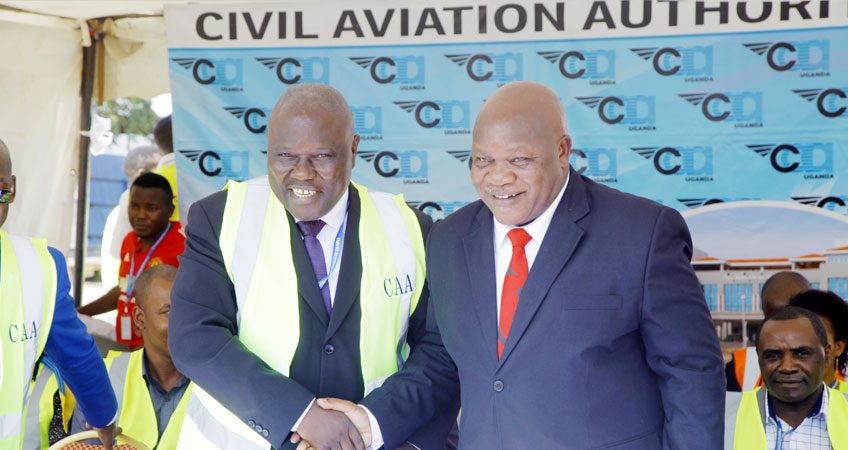 Posted by In Media Watch 0 comment
By Monica Acan

The Civil Aviation Authority (CAA) has said it has completed 17 per cent of the ongoing expansion works at Entebbe International Airport, a year after the project was commissioned. The completed works are part of the 20-year National Civil Aviation Master plan to revamp the airport and give it a modern look.

The airport was officially opened in 1951 and government targets to, among others, expand its departure and arrival terminals. Dr David Mpango, the CAA acting managing director, while addressing journalists after the tour of the ongoing works, said the authority has so far spent Shs90b of the Shs721b loan the government acquired from China.

He said: “Cargo traffic at the airport has increased from 6,600 metric tonnes in 1991 to 59,000 at the turn of last year, with projections of estimated growth at 6.5 per year for the next 17 years thus requiring a new 100,000 tonnes capacity cargo centre to accommodate the growth.”

Other works currently being undertaken include modification and expansion of the terminal building. CAA said it hopes to have 930 arriving passengers and 820 departing passengers from the current 410 arriving and 320 departing passengers during peak hours. Dr Mpango said expansion of the long term car park is under phase two of the expansion involving creation of additional capacity to park 360 cars up from 100 cars and is to be completed in May. There is also improvement of air navigation services and automation at the airport as a result of a Memorandum of Understanding with the Republic of South Korea under an extended grant worth $ 9.5m.

Some of the recently completed works at the airport include automation of the aeronautical information management system and modification of the VVIP terminal. A total of 42 police housing units have been completed to relocate the Aviation police from the cargo centre site. On procuring of a national airline, Dr Mpango said although government pronounced its self on the need to restore Uganda airlines, the project would face a delay.

“Arrangements are in advanced stages to flag off the airlines and we hoped that by August, the plane will be in the air but because of logistics, we postponed it to December,” he said.