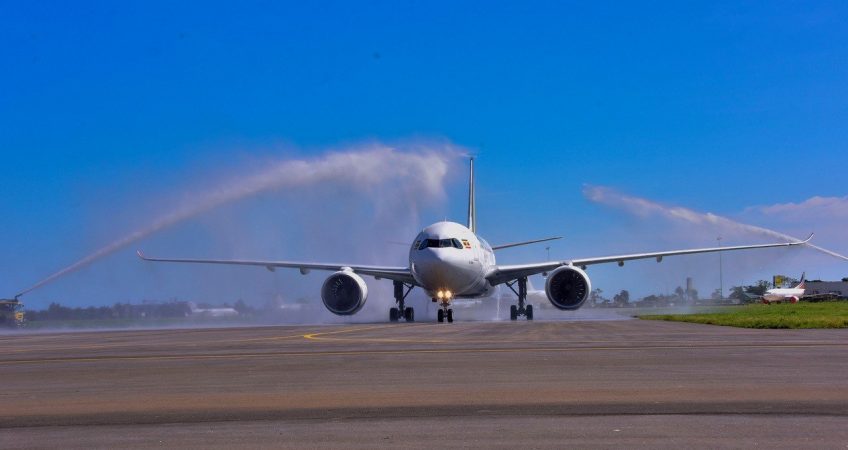 The Civil Aviation Authority has approved the two A330-800 Neo Airbuses and included them on Uganda Airlines’ Air Operators Certificate (AOC).

The Airbuses arrived last December and January this year, but they remained grounded pending CAA’s approval.

Uganda Airlines made the announcement on their Twitte handler, saying: “Hooray! The wait is over! Uganda Airlines’ big cranes, the Airbuses, have been added to our Air Operator’s Certificate (AOC) and will soon be set to fly long haul. Welcome to a new world of greater connectivity.”

The approval process takes five phases including pre-application, application, and document evaluation, demonstration of the approved documents and inclusion of the aircraft on the existing Air Operator’s Certificate.

Early this month, the airline’s Acting Chief Executive Officer Jenifer Bamuturaki noted that they were in the third phase of the approval process. She was however optimistic that the airbuses would be approved by end of August.

The development is a boost to the airline since it plans to start flying long-haul commercial routes to places like Dubai next month.

Uganda Airlines had initially planned to start flying to Dubai on July 16, 2021, but postponed the launch because CAA had not approved the two A330-800 Neo Airbuses.

The flights were also delayed because of the suspension of flights by UAE to Uganda to combat the spread of COVID-19. The country was battling the second wave of the pandemic.  But some media reports also showed that UAE made the decision after over 200 Ugandans who presented negative COVID-19 test results tested positive upon arrival in UAE.

However, on August 5, 2021, UAE started allowing flights from Uganda for people with valid resident entry permits.

The airline is targeting migrant workers who travel to the Middle East and businesspeople among others on the Dubai route. Between 200 and 300 migrant workers leave the country daily for work in Saudi Arabia, Oman, and other gulf countries every day.

However, Uganda Airlines hopes to attract more clients on the Dubai route and other routes by offering affordable prices and excellent services.

Uganda Airlines hopes to also commence London flights in November this year. The airline had expected to operate its first London flight in September but has postponed the launch because the UK also red-listed Uganda in June over surging COVID-19 cases.

Mr Bamuturaki says the airline plans to launch other regional and international routes such as Mumbai, Guangzhou, Lagos, and Kisangani by 2023.

Meanwhile, Uganda Airlines will mark two years since its services were revived on August 29. The airline re-launched flights 18 years after it had been liquidated in 2001. It was first launched in 1976 by the then President Idi Amin.

During its first year of resumption, the airline carried over 75,000 passengers in its four CRJ 900 Bombadier air crafts that ply regional routes namely Nairobi, Dar es Salaam and Juba.

When the Airbuses were added to its fleet, President Yoweri Museveni said the revived airline will support Uganda’s economic growth by facilitating transport and tourism.

He added that it will be “a major boost if the $400 million Ugandans spend annually on air travel comes to our own airline.”

Before the outbreak of COVID-19, Uganda used to receive approximately 1.6 million tourists every year, with earnings of over $1.5 billion annually.

However, the board of directors and top managers of the airline were suspended three months ago on allegations of corruption and mismanagement.