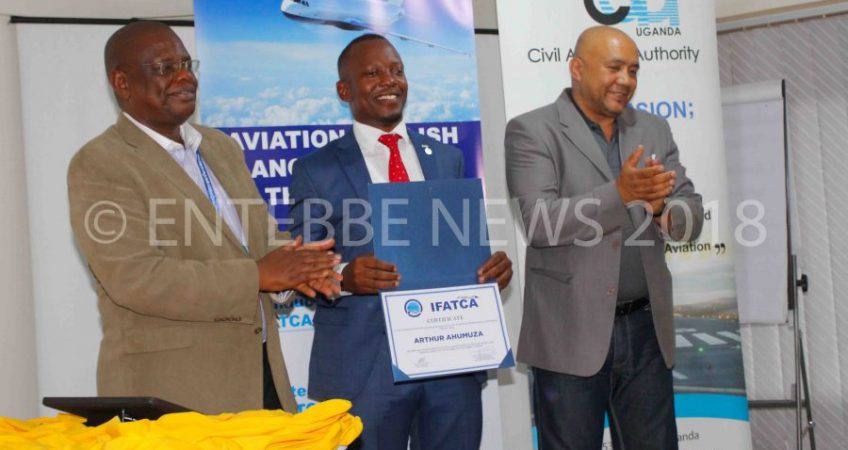 Civil Aviation Authority (CAA) has bolstered it’s position and ranking on the African Continent after it successfully sponsored and hosted the regional Aviation English Language Train the trainer course.

The five day training which was held in Entebbe from 15th-19th October 2018 and conducted by the International Federation Of Air Traffic Controllers’ Association (IFATCA) had participants from Uganda, Kenya, Rwanda, Burundi, Sudan, Democratic Republic of Congo (DRC), Yemen and Algeria.

Speaking at the closure of the five day training on Friday, the Uganda Air Traffic Controllers Association President Arthur Ahumuza thanked CAA for sponsoring the course and indicated that the purpose of the training is to improve Aviation safety.

After realizing that most of the accidents were caused by miscommunication between Air Traffic Controllers and pilots, ICAO brought the initiative of training both the pilots and the Air Traffic Controllers in a common language namely Aviation English which isn’t plain English. Aviation English is a coded Language which should be understood by everyone flying and everyone controlling, explained Ahumuza.

In Aviation English, we use Aviation Alphabet A, B, C, D to Z which becomes Alpha, Bravo, Charlie, delta up to Zulu. That is the language that will be understood and the main reason behind the language is to remove ambiguity and make it clear for everyone. In Aviation English, the numbers from 1-10 are pronounced differently. An Air Traffic controller controls the plane right from the time it starts movement from the ground, it gets Air bone and in the air, the Air Traffic Controller is still giving instructions to the pilot until a time when that plane lands again at a different aerodrome so the communication between a pilot and a controller there has to be a common language given that the pilots and Air Traffic Controllers have different origins.

On his part, Mr. Fred Bamwesigye the CAA Deputy Managing Director who presided over the closure of the training commended the Air Traffic Controllers for the significant role they play in ensuring safety and efficiency to flights both in the air and on the ground and added that the training is important because it helps others achieve the required levels of English language proficiency, which is a major requirement for licensing of controllers.

The training is aimed at promoting safety in aviation through better communication and the communication between the Air Traffic Controller on the ground and the pilots in the Air is not normal English we are talking about. The English spoken is standardized so that it is spoken everywhere, even those who aren’t ordinarily English speakers. The advice and instructions the Air Traffic Controllers issue to pilots enable them to avoid collision and ensures expeditious and orderly flow of Aircrafts in the airspace, Mr. Bamwesigye said.

This particular course “Train the Trainer” in English language proficiency is extremely appropriate in light of the fact that ATC-Pilot communications are the pivot on which air transport survives. I commend the International Federation of Air Traffic Controllers Association (IFATCA) for supporting controllers through organizing such trainings and the main goal of an Air Traffic controller is to promote safety, efficiency and regularity in International Air Navigation and to assist and advise in the development of the safe and orderly systems of air traffic control, and for this to be successfully done, there should be clear communication without ambiguity.

Posted on Online by Entebbe News on 22nd October, 2018