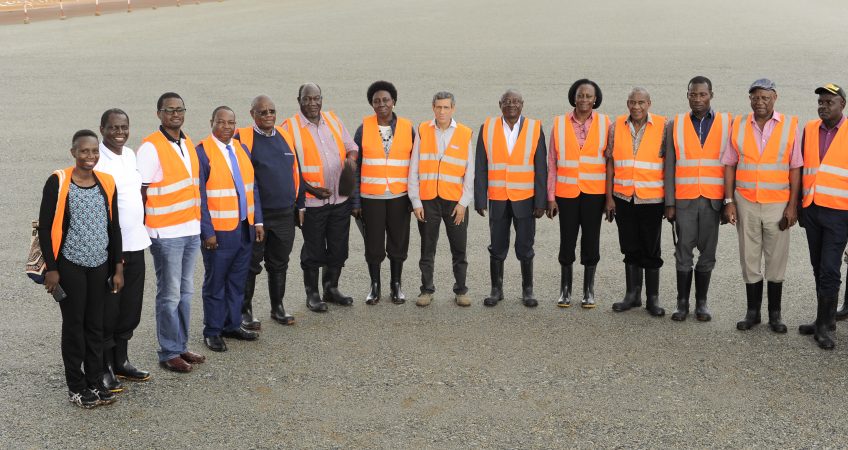 Eng. Edward Kaweesi Ndawula, the CAA Board Chairperson who led his board members on a field visit to the construction site on Tuesday, said they are impressed by the speed of the works, level of integrity and professionalism exhibited by the contractors.

The Airport is one of the key support infrastructures for the next course of the fast paced activities leading to commercial oil production. The airport construction works, which are in the second phase commenced in April 2018.

The US$ 309 million Airport project provided by Standard Chartered Bank and UK Export Finance is being undertaken by a joint venture of Israeli-British firms, Shikun & Binui International-SBI/Colas limited.

Currently, the construction of Runways, Earth works, capping of layer, pavements, Apron and filling areas for cargo is ongoing.

Ruth Apolot, the Senior Engineer Planning and Development CAA, says the Airport component will include a terminal, Parallel Runways, Cargo facilities, a control tower, an Apron, Taxi way and accommodation for staff among others.

Apolot says after completion, the Airport will handle both Cargo and passenger flights because the terminal building will be multipurpose.

Cherif Taha, the Resident Engineer of Shikun & Binui International-SBI, says their work has slowed down because of heavy down pour that started in September and has persisted, which may affect the project completion period.

Initially the construction of the Airport was to be completed by 2020.

Adopted from: The Independent November 27, 2019