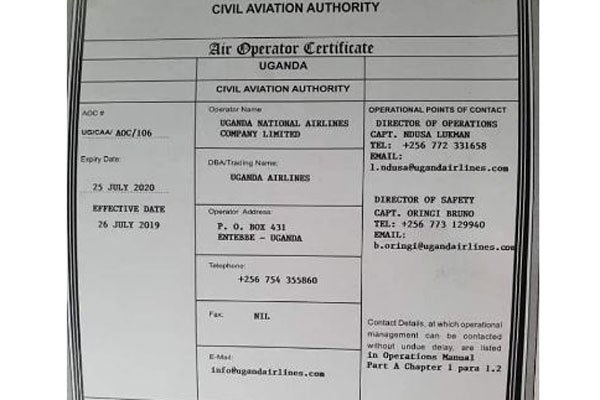 Uganda National Airlines Company Limited has been issued with an Air Operator Certificate by the Civil Aviation Authority, a move that will officially allow it start commercial flights.

The national carrier missed its scheduled start for the commercial flights this month because it didn’t have a licence.

“This is the biggest milestone in operationalising our commercial flights,” Uganda Airlines posted on its facebook page after receiving the licence.

Minister of Works and Transport Monica Azuba Ntege told journalists this week that the airline will be able to fly in August. The launch routes will be Nairobi, Dar Es Salaam, and Mogadishu.

These destinations, the minister said, will be operated first to orient staff and service providers. Other destinations will come after August.