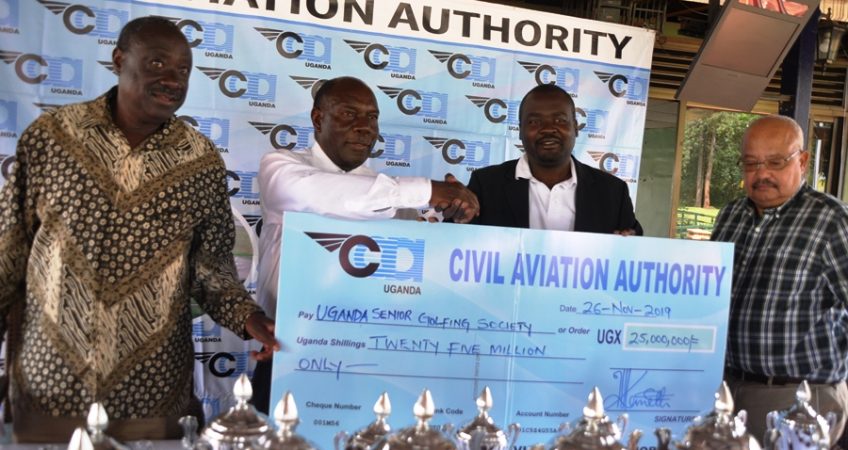 USGS is made of golfers of 55 years and above. It’s head Mark Ntege believes the tournament has grown leaps and bounds.

The country is still in a delightful mode after the government in April relaunched the National carrier Uganda Airlines back to the skies after 23-year hiatus.
In Africa, aviation is not a priority mode of travel for many but as one ages, it is almost a necessity to some. And Uganda’s Civil Aviation Authority (CAA) spots quite well. For a fifth year running, CAA, who handle the business at Entebbe International Airport, has again chosen to stand with some of their most loyal customers – senior golfers.
CAA will mark celebrations of the International Aviation Week by sponsoring the fifth Seniors tourney at Uganda Golf Club in Kitante this weekend. The week commences December 1-7 and the two-day tournament, organised by Uganda Seniors Golfing Society (USGS), tees-off on November 30.
“Golf is a sport that shares a lot of discipline like the aviation industry which shares the same discipline, it’s a sport connected to tourism and you cannot differentiate it from CAA,” said CAA’s PRO Kenneth Otim after announcing a Shs25m sponsorship during a press conference at Kitante yesterday. “CAA intends to carry out the senior edition around the country at different aerodromes,” added Otim.
USGS is made of golfers of 55 years and above. It’s head Mark Ntege believes the tournament has grown leaps and bounds. “The edition will have both seniors and sub-seniors under 55 years,” stated the ever calm Ntege. “Last year, we had 180 golfers and we expect a similar or larger number this year from different parts of the country,” he said. Ladies above 55 years are also in the fray and the event will have subsidiaries of 65 years and below for both in the men and women’s categories.
Familiar names expected to compete include 94-year-old player Mzee Apuuli Basaliza from Fort Portal, Charles Kareeba, Amos Nzeyi and Minister John Byabagambi among others.