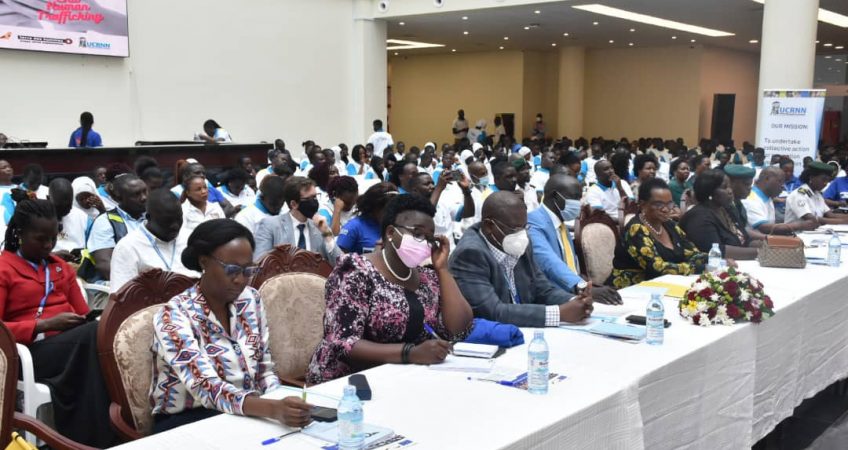 ENTEBBE – Uganda, on Saturday, joined the rest of the world to commemorate world day against trafficking in persons.

The national event – held at Entebbe International Airport was organised by the government of Uganda through line Ministries of Works and Transport and Internal Affairs together with Uganda Civil Aviation Authority in partnership with a number of Civil Society Organizations led by the Coalition Against Trafficking in Persons – Uganda and other development partners under the theme “Use and abuse of technology in reference to Trafficking in Persons”.

According to the National Report on countering trafficking in persons for 2021, Entebbe Aviation Police registered the highest number of incidents of human trafficking (64) involving hundreds of victims. A total number of 727 victims were identified and registered during the year from various areas in the country, 297 were trafficked to Dubai, 175 to Saudi Arabia, 110 to Qatar, and 50 to UAE among others.

Officiating at the event, Gen. Katumba Wamala – Minister of Works and Transport said that holding such an event at the country’s major gateway for international passenger traffic sends a strong message to national and international audiences that Entebbe International Airport is totally against the vice of human trafficking and does not in any way condone such activities.

Represented by his junior minister, Musa Ecweru, Gen Wamala revealed that the Ministry of Gender, Labor and Social Development also provides clearance to individuals going for employment to specific destinations, which have previously recorded high cases of human trafficking.

He noted that international human trafficking is not only one way, “as we have also had cases of people trafficked to Uganda, especially from Pakistan and Eritrea, among others. The rationale of this engagement is to enhance awareness by focusing, especially on preventive measures.”

“Besides planes, traffickers also extensively use boda-bodas, vehicles, trains and ships or boats. It is clear that the entire transportation chain is sometimes misused by wrong elements who transport the recruited human trafficking victims from the villages (where recruitment happens most) to the airport and other border points.”

Wamala added, “Many of you may have seen and read harrowing reports of how the victims of human trafficking have been traumatized, lost lives, had their internal organs transferred without authority, and undergone a lot more untold suffering. The perpetrators of the vice have ironically become immensely rich through this illegal activity hence the reason it attracts many and is difficult to eliminate.”

Nonetheless, he says with concerted efforts of “this nature, we are optimistic that the masses can be sensitized and we play our part in prevention, which Government looks at as the most important part of the campaign.”

Director General Uganda Civil Aviation Authority, Mr Fred K. Bamwesigye said that quite often, the airport stakeholders arrested the perpetrators of the vice “but have unfortunately ended up facing very light penalties attracting fines as low as three hundred thousand shillings (300,000/=) for not only human trafficking, but drug trafficking as well.”

“The two vices are a menace to air transport and have a very negative impact on society. It is, therefore, extremely disheartening to realize that after investing a lot of time and energy in apprehending the culprits, they end up with such light sentences, and back again on the streets to engage in the same bad habits of seeking more recruits since they know that even when they are caught, they can easily walk away after paying the penalties provided for in the law,” he decried.

“This is a matter that requires to be treated with the urgency it deserves if we are to make serious headway in the noble fight against the two vices of human and drug trafficking,” he called.

Bamwesigye also revealed that most of the victims have also become sophisticated as they are extensively trained by their traffickers.

“Some of the victims now use tourist visas yet they are travelling for perceived employment opportunities. It, therefore, calls for a little bit of further interrogation to eventually detect some of the victims.”

Lt Gen. Joseph Musanyufu, PS Ministry of Internal Affairs, represented by his commissioner of immigration, Col. Geoffrey Kambere said that “Uganda is a source, transit and destination for human trafficking.”

According to him, human traffickers trick victims with fake job offers and promises before exploiting them through online technologies.

“Research conducted by the United Nations Office on Drugs and Crime (UNODC)) shows how traffickers are currently using technology to profile, recruit, control and exploit their victims as well as using the internet, especially the dark web, to launder proceeds of the crime and hide their real identities from investigators.”

“Today, the Internet provides easy access to a much larger group of potential victims because traditional physical and geographical limitations no longer exist. Traffickers use technology to control their victims remotely, sometimes without having ever met them in person. The attempt to control COVID-19 pandemic provided further opportunities for traffickers due to the increased use of the internet, especially by children at the time when schools were closed,” said Gen Musanyufu.

He commended all the stakeholders and development partners who have supported Uganda’s counter-trafficking efforts ever since the country passed the Prevention of Trafficking in Persons Act 2009, saying that it has benefited the country in combatting the vice.

In her part, Dr. Annete Kirabira – Chairperson Board of Directors – Coalition Against Trafficking in Person Uganda (CATIP-U) said that every day, in every country in the world, Human Traffickers exploit human beings for profit, revealing that the poor and vulnerable are most at risk.

“Over 70% of the detected trafficking victims are women and girls while nearly third are children.”

She noted that the acquisition of digital tools and use of technology is an ever-growing trend in Uganda which gears double aged role of technology with regard to the crime of trafficking in person.

“There is no doubt, therefore, that Technology has provided easy access to a much larger group of potential victims because traditional physical and geographical limitations no longer exist.”

Dr. Kirabira says that traffickers are currently using technology to profile, recruit, groom, control and exploit their victims as well as using the internet, especially the dark web, to hide illegal materials stemming from trafficking and their real identities from the investigation.

“The report titled, ‘Disrupting Harm in Uganda’ by ECPAT, INTERPOL and UNICEF Office of Research, found that in Uganda online Platforms are increasingly being used for child sexual exploitation and abuse.”

“Further still, Traffickers are using technology to control their victims remotely, sometimes without having ever met them in person. They threaten to release intimate photos or videos of them to families and friends if they do not comply with their demands,” she added.

The Coalition wants the Government of Uganda to improve safety standards in cyberspace including developing systems, acquiring tools and capacitating law enforcement agencies to detect online criminal activities of recruitment, grooming, control and exploitation of victims.

They also want Uganda, particularly the legislative arm to expedite the process of enacting the Witness Protection Law to enhance protection of victims and witnesses participating in the criminal proceeding of the crime of trafficking in person and prevent re-traumatization.

Dr. Kirabira said that the government should also expeditiously operationalise digital reporting channels (Toll-free lines) as an ICT tool under the coordination office for the prevention of trafficking in Person to ease reporting of cases of trafficking in persons by the general public.

Other Coalition’s call include;

The Government through the Ministry of Gender, Labour and Social Development is called upon to review and include in the pre-departure orientation training curriculum for the Ugandan migrant workers a module on the use and abuse of technology and indicators of online trafficking of migrant workers in the countries of destination.

Increase training and resourcing for law enforcement, prosecutors and judges in the use of technology in investigation, prosecution and adjudication of cases of trafficking in person.

The Government and stakeholders should draw targeted awareness programs for the general public particularly the children, youth and parents on the use and abuse of technology to prevent and protect would-be victims from falling prey to the traffickers through online platforms.

Government should undertake research to enhance stakeholders understanding of Technology in accelerating abuse and exploitation of victims.

The private sector particularly the internet and telecommunication service providers are called upon to undertake a responsive due diligence approach to prevent the use of their services and tools from facilitating online abuse and exploitation of victims of Human Trafficking.