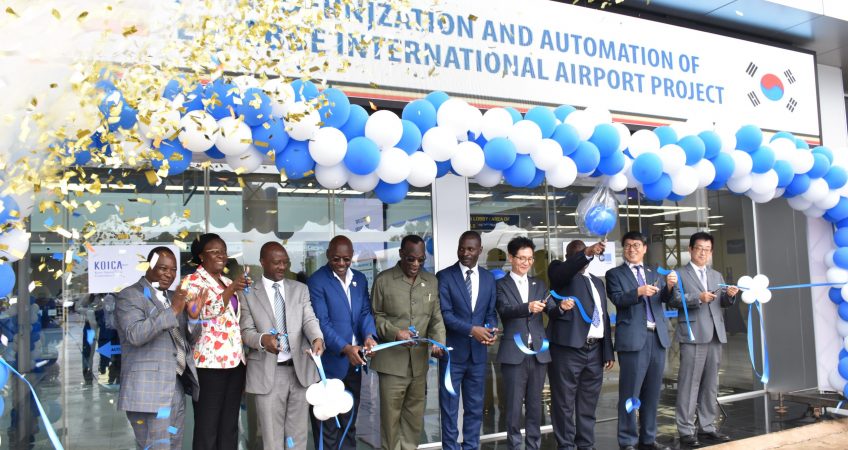 The Uganda Civil Aviation Authority(UCAA) in 2016 embarked on a $9.5million (Shs40billion) automation process that included the establishment and operationalization of  an Airport Operations Database (AODB), a Computerized Maintenance Management system (CMMS), and a Terminal Operations Control Centre (TOCC) at Entebbe International Airport.

On Thursday, the automated system was commissioned by the State Minister for Works and Transport Fred Byamukama.

Speaking at the event, Byamukama said the Ugandan government is committed to supporting and providing an enabling environment for the growth of the aviation industry in the country to spur economic development.

He noted that such projects like the automation of the airport show the commitment.

“This will help to improve on the security and safety of the airport. Now we can  easily monitor the surrounding of the airport because of the automation. This will save the aviation industry the expenditures they were making to deploy people to do this job,” Byamukama said.

“Efforts towards automation of systems, especially in the aviation industry ought to be applauded because embracing modern technologies reduces human interference and errors which is key in enhancement of safety.”

Byamukama said by  automating the  air navigation system of Entebbe Airport, Uganda is  enhancing  information sharing and coordination with pilots, other airports and also fulfil compliance with international provisions.

The State Minister for Works and Transport applauded President Museveni for inviting South Korean “friends” who funded the automation project through a grant  that cost shs40 billion and of this, Uganda paid only shs4 billion.

He noted that government attaches a lot of importance to the aviation industry because it guarantees the country direct international access and in turn promotes trade, tourism and social economic development.

To this, Minister Byamukama said government has concluded various Bilateral Air Service Agreements(BASAs) with several countries brining the current  total to 51, 27 of which are operation with the latest ones being with Finland, Colombia and Spain as well as reviewing previously existing BASAs with Italy , Belgium and Germany.

“The opening of new routes, revival of the Uganda Airlines and the ongoing development of a second international airport at Kabaale in Hoima district are all intended to accommodate current and future air traffic.”

The Uganda Civil Aviation Authority Director General, Fred Bamwesigye, traffic at the airport has continued to grow as the aviation industry recovers from the adverse effects of the COVID-19 pandemic.

He cited an example of last month ( Aug 2022) recorded the highest traffic  since the lockdown with  a total of 156,081 international passengers (73,899 arrivals and 82,189 departures) being handled at Entebbe International Airport.

“Airport improvements are moving targets. Whereas now we are carrying out expansion works for Entebbe International Airport to ensure the number of passengers we accommodate grows from two million per year to at least 3.5 million, we will continue to respond to pressures of expansion in the air business and move to six million passengers handled per year with time,” Bamwesigye said.

Underscoring the importance of the automation, the Uganda Civil Aviation Authority(UCAA) boss said it will see Entebbe International Airport become one of the best not only in the region but in the world.

“Previously, the systems at the airport were not speaking together and we were automating them in parts. This project brought every system together so that you can see them at one touch. Air navigation systems, air traffic control systems, airport management systems, especially safety management systems and other airport systems in administration are now all synchronized and you can see each part at a go,” Bamwesigye told the Nile Post in a separate interview.

“The system is also now synchronized with security cameras all the time. You can now see what is happening in all corners of the airport in one go unlike before when we had separated systems. “

The UCAA boss said the Koreans have also trained Ugandans to use the system for effective use.

Bamwesigye explained that with time, even upcountry airports will be automated as part of the project.

Asked to explain how much will be saved by automating systems, the Uganda Civil Aviation Authority boss explained that in aviation, security and safety are key, other than the amount of money saved.

“We can’t quantify in terms of money but rather in terms of efficiency . Because we are in the business of safety and security, when these improve and have very few cases of lapses, we call it a gain. “

The automation works that started in 2016 were funded by the South Korean government through the Korea International Cooperation Agency (KOICA).

According to the Korean Ambassador to Uganda, Park Sung-soo, the project is testament to the close relations between Uganda and South Korea.

“This project has borne testament to the fruits of collaboration between Uganda and the Republic of Korea. Ultimately, the project is aimed at enhancing operational efficiencies and enhancing passenger experience which will also improve the rating of Entebbe International Airport by international aviation standards,” Sung- soo said.

The automation of the airport means there will be real-time monitoring of consumption and use of services like electricity and air condition through the computerized maintenance management system(CMMS) and will ease the burden on Uganda Civil Aviation Authority facility management staff.

This also means that maintenance and repair costs can be reduced by automatically checking key facilities in the airport.

The automation means that staff  at the Terminal Opetation and Control Centre(TOCC) can ably monitor the airport operation status in real-time, thereby enabling quick response to emergencies and failures.

The AMHS enables real-time sharing of key aviation information not only within six other aerodromes in Uganda but also with Kenya and Tanzania.

The automation has also seen the installation of an Air Traffic Control CCTV system that includes long range cameras along the two runways at the airports and covering what were hitherto, blind spots for air traffic controllers.

Also as part of the automaton ,100 outdoor and indoor cameras, two large LED boards for flight information display have been installed in the new passenger terminal building as well as two movable LED kiosks to allow passengers departing from the airport to check real-time flight information.