The Aviation Police Commandant at Entebbe International Airport, SP Jasper Oloka said Albeys Doralys was arrested on 18th June, 2018 for possessing a total of 1660gms of cocaine, which she had swallowed.  Oloka said that police charged the accused with unlawful possession of narcotic drugs and trafficking in narcotic drugs.

Intelligence had indicated to the Aviation police at Entebbe that Doralys had initially booked to travel from Sao Paulo in Brazil to Addis Ababa through Nairobi on June 17, 2018, but suddenly changed her routing and arrived at Entebbe International Airport on 18th June, 2018.

Oloka said that once police was armed with intelligence information that Doralys was in possession of drugs, she was identified by Aviation Police and Uganda Revenue Authority customs officials on arrival. Her bags were searched, but no drugs were found. However, after being subjected to a body scan, it was discovered that she had swallowed over 114 pellets (1660 grams) of suspected cocaine.

Upon questioning, she told police that she left Venezuela and went to Sao Paulo in Brazil and started working in a supermarket.   According to her statement, on June 15, 2018, she was approached by a man only known to her as Antonio who promised to get her a better paying job.

In her narrative Doralys said that Antonio reportedly took her to a house located in ‘Villa Yolanda’ in Sao Paulo and forced her to swallow the pellets and she was then escorted to the airport.  On arrival at Entebbe, she was supposed to proceed to Kibuli, a city suburb from where somebody she did not know by face or name was to receive her.

Upon completion of her mission Doralys was supposed to be paid $2,000 (approx. Ug Shs 7.7 million).

In a related case, the Entebbe Magistrates court also fined Mr. Adson Ampaire, an employee with a ground handling firm, NAS for conspiracy to airlift 8kgs of heroine at Entebbe International Airport.

The accused had hidden the cocaine in a van, which was intercepted by the CAA’s Aviation Security (AVSEC).

The Aviation Police Commandant at Entebbe, SP Oloka Jasper confirmed that two drivers of NAS, Mr. Ampaire and Mr. Ngelo Aggrey were arrested with 8kgs of heroine trying to traffic it through the airport’s southern gate on 30th August, 2018.

Mr. Ampaire who is a resident of Sheema Municipality was on the 7th September, 2018 presented before Entebbe Grade 1 Magistrate Court and pleaded guilty for conspiracy and was charged with a two year sentence or a fine of Ug Shs500,000.

His co-accused Mr. Ngelo from Kamuli district is on the run and is yet to answer charges of drug trafficking.

Oloka said that the drug traffickers operate in cells (network), which makes it hard to break through and discover the ring leaders. “Even the traffickers that we have arrested cannot tell who the owners of the business are. They operate in a network like a mafia group,” he said. 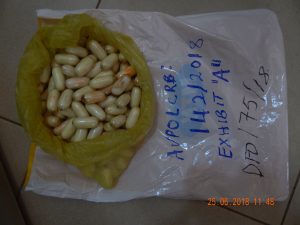