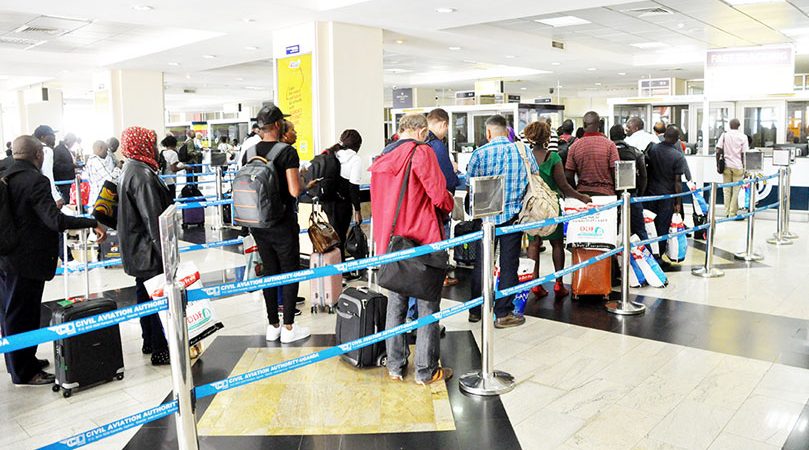 Vianney Luggya, the UCAA spokesman says that of the 81,968 passengers who passed through Entebbe Airport in August, the majority were departing or in transit. He says 37,415 people departed, 10,608 were in transit and the remaining 33,941 were arrivals.

Entebbe Airport resumed commercial flight operations last October. Since then, the passenger numbers have been fluctuating from month to month due to easing or imposition of global travel restrictions.

The April figures excited the sector players since they surpassed those for February. However, the excitement dropped in May until July because Uganda detected the Delta variant and instituted extra measures such as banning flights from India and re-testing travelers from nine other countries including Kenya, South Africa, Tanzania, and South Sudan.

Uganda also instituted a nationwide lockdown in June. However, the airport remained open. But passenger numbers dropped because UAE, UK, and Canada banned flights from Uganda in June while airlines such as Rwanda Air suspended flights due to the surging number of COVID-19 cases in Uganda.

The passenger numbers as a result of the measures dropped in May from 77,063 travelers to 75,472 passengers in June. The airport however recorded the lowest number of travelers in July, with 61,328 passengers.

The daily average of passengers thereby reduced to 1,978 compared to 5,412 passengers before the COVID-19 pandemic outbreak in Uganda.

Though Uganda is still on the UK red list, with the easing of travel restrictions elsewhere, the passenger numbers have increased over the last four weeks.

Richard Mujjuzi, a travel agent and former chairman of Ugandan Association of Travel Agents-TUGATA, says that most people are traveling for work, business, and medical care.

He adds that few tourists are traveling because of restrictions. “For instance, many people are struggling to get fully vaccinated to travel to Canada that lifted Uganda’s travel ban on September 7 and also the inconvenience of taking two COVID-19 tests for those going to UAE.”

Mujjuzi is however optimistic that the aviation industry could record a 40 percent recovery rate by end of the year if more countries open up and also if more people travel for say the Dubai Expo that will run from October 2020 to January 2021.

“Otherwise, the increase in passenger numbers is currently driven by recruitment of migrant workers,” says Mujjuzi.

Mujjuzi however says levying each departing passenger 10 US Dollars, as approved by parliament to boost aviation revenue,  and mandatory testing for all arriving passengers could discourage non-essential travel. The government is expected to pronounce itself on both proposed measures and whether or not they will be implemented at the airport.

Ronald Mukundane, the spokesperson of Uganda Association of External Recruitment Agencies (UAERA) says  13,000 migrant workers left the country in August, up from a monthly average of 9,000. The workers were destined for mainly Saudi Arabia, Jordan, and Oman.

Mukundane however says labor companies are still struggling to get UAE visas for migrant workers. “So we expect workers to start traveling to Dubai next month.”

Dubai is one of the top four routes from Entebbe International Airport, with an average of 16 flights a week.

Irene Nalujja is among the several passengers who are delighted about UAE lifting the travel ban and hopes to fly back to Dubai in November. She however wants the government to reduce the turnaround time to less than two hours and the cost of re-testing arriving passengers from 65 US Dollars to 50 US Dollars.