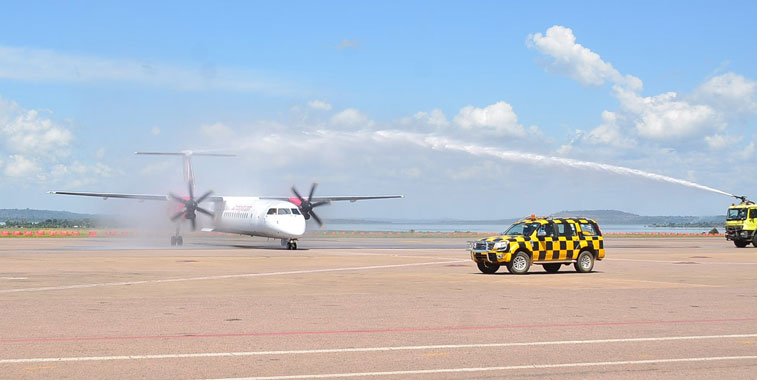 Entebbe Airport welcomed the arrival of Jambojet’s inaugural service from Nairobi on 15 February, with the Ugandan airport greeting the airline’s first flight with a water arch salute. The carrier presently operates the 520-kilometre route twice-daily using its fleet of Q400s. Last year Entebbe handled 1.53 million passengers, up 8.1% versus 2016.

Entebbe Airport lies 47 kilometres south of Uganda’s capital city, Kampala, and serves as the international gateway to the African nation. Kampala is home to a population of over 1.5 million people. A few years ago it was named as one of the fastest-growing cities in the world by World Mayor, a website that makes its assumptions based on past growth/decline and forecasts by international and national statistics organisations. It states that between 2006 and 2020, Kampala will see its population grow at an average of just over 4%, so it is not surprising  to see that growth is on the agenda for Entebbe Airport.

Traffic goes beyond one and a half million 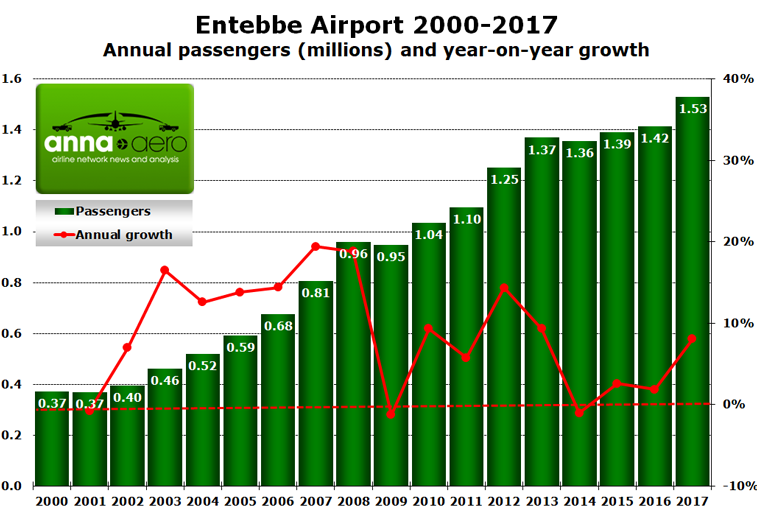 When placing Entebbe’s monthly passenger statistics for 2017 into anna.aero’s Seasonal Variation In Demand (SVID) calculator, the airport does well, generating a score of 1.07 – an ‘Excellent’ rating. The busiest month for the airport last year was December, with 147,590 passengers travelling through the terminal, while the quietest month was February with 107,174 passengers. OAG data indicates that the number of seats departing Entebbe this summer is up 20% versus S17, with over 866,000 one-way seats being provided.

OAG schedules show that Ethiopian Airlines is the largest operator at Entebbe, offering just under 140,000 departing seats from the Ugandan airport this summer. However, it should be noted that 13,000 of these seats are made up of the airline’s tag-on connection from Addis Ababa to Goma which operates via Entebbe, with the Star Alliance member not having traffic rights between Uganda and the Democratic Republic of Congo according to the airline’s booking engine. Along with Addis Ababa, Ethiopian Airlines also flies from Entebbe to Juba in South Sudan, a route for which it does have traffic rights, and operates daily this summer using Q400s. One airline which is new to the top 10 is Jambojet (highlighted in light green), with the Kenyan low-cost airline having begun flights to Entebbe from Nairobi on 15 February. It presently offers a twice-daily Q400-operated service between the two African airports. 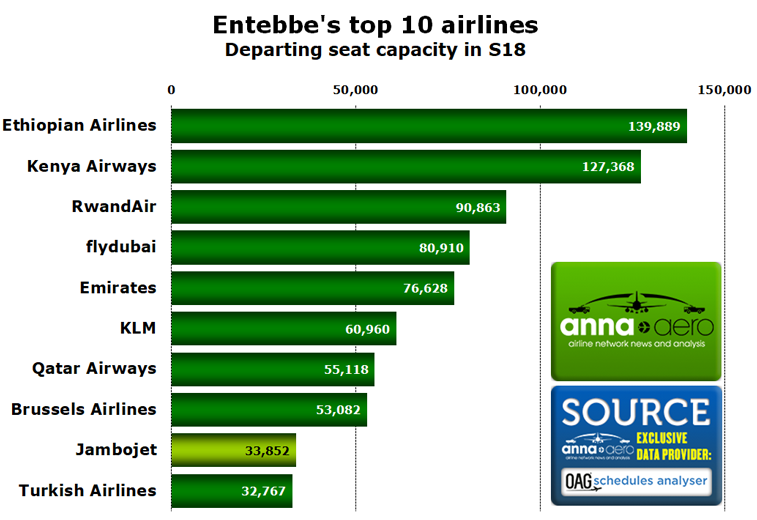 Entebbe is a prime example of how multiple carrier’s use triangular services to serve more than one African city per aircraft rotation from its home base. For example Kenya Airways uses the airport as a stop on some of its weekly rotations to Bangui in the Central African Republic, flydubai travels via Entebbe between Dubai and Kinshasa, plus Qatar Airways’ daily 787-8 route from Doha returns to its hub via Kigali in Rwanda. Similar to Qatar Airways, Turkish Airlines also operates Entebbe and Kigali services on the same aircraft rotation, however it offers a non-stop service to Istanbul Atatürk on its departure from Entebbe, with Kigali being the first stop on the outbound rotation from its Turkish hub. One airline has left the Entebbe market since last summer, with Etihad Airways having ended it four times weekly service from Abu Dhabi on 23 March.

With Ethiopian Airlines, Kenya Airways, Rwandair, flydubai, Emirates and KLM being among the leading airlines, it is no surprise to see that the routes to these carriers’ hubs top the table when it comes to Entebbe’s leading destinations. anna.aero decided to see which airports are the top unserved markets from Uganda’s fast-growing international hub. Topping the unserved route rankings is London Heathrow, with an estimated 59,500 passengers (81 PDEW) travelling between Entebbe and Europe’s largest airport in 2017. The leading airlines for traffic on the route last year were Emirates and Brussels Airlines, with both capturing 20% of the market. Kenya Airways was third, capturing 19% of passengers via Nairobi. It should be noted that Mumbai is the second top unserved market, with RwandAir offering its route from Kigali to Mumbai via the Ugandan airport, despite it not having traffic rights from Entebbe to the Indian city. It should also be noted that Khartoum, the third largest unserved destination, is presently listed as a destination in OAG with Tarco Airways, however when looking at the airline’s booking engine, the route will start on 25 August, operating via Juba. Along with Khartoum, a further four destinations in the top 10 (highlighted in light green) are in Africa. 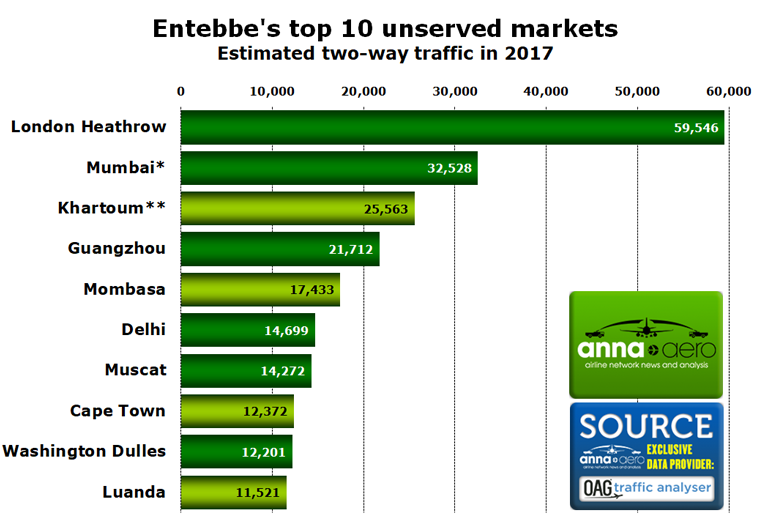 Outside of the top 10, three more destinations saw over 10,000 indirect passengers last year, namely London Gatwick, Bujumbura and Shanghai Pudong. Looking ahead, the only new destinations presently planned to join Entebbe’s departures board are Dar es Salaam and Kilimanjaro, with Air Tanzania planning a Dar es Salaam – Kilimanjaro – Entebbe rotation from 26 August, with the carrier returning to the Ugandan airport after a nine-year hiatus. 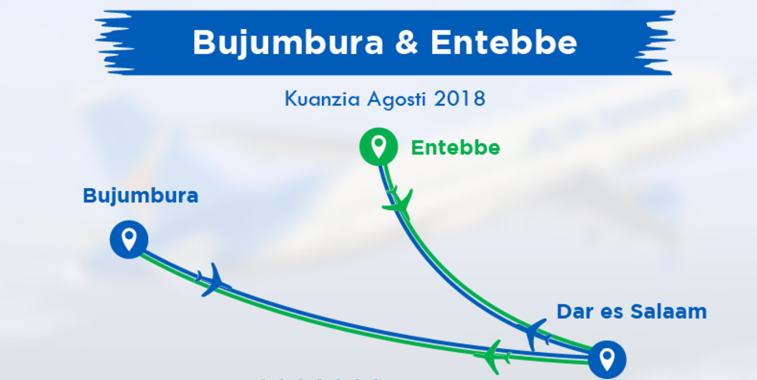 Following in the footsteps of Jambojet, the next new airline planning to launch flights to Entebbe is Air Tanzania, with it scheduled to operate a Dar es Salaam – Kilimanjaro – Entebbe rotation from 26 August. While Dar es Salaam and Kilimanjaro will be new destinations for 2018, MIDT data shows that London Heathrow is the more desired destination, with nearly 60,000 passengers travelling indirectly between the UK airport and Entebbe in 2017.