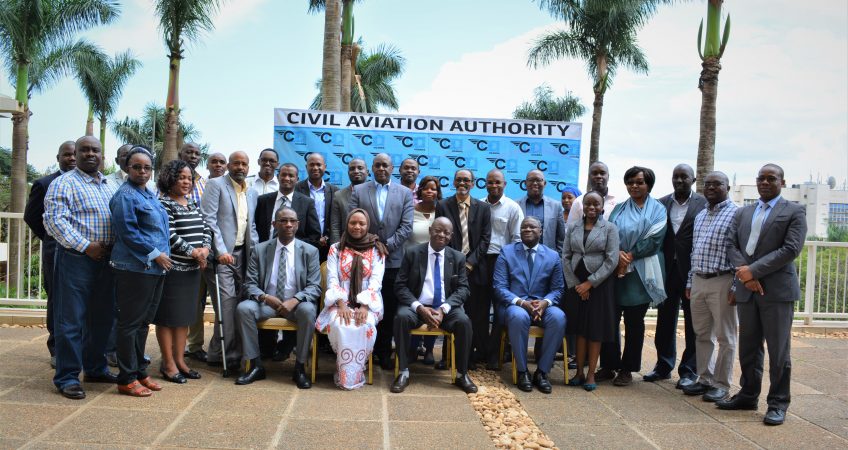 The regional aviation stakeholders brainstormed on the feasibility of establishing a Satellite Based Augmentation System (SBAS) module in East Africa, which is expected to increase runway capacity to handle more landings and departures, increase aerodrome accessibility and enhance safety through ensuring stabilized approach paths for flights, among others.

Speaking at the opening ceremony, the Minister of State for Transport, Hon. Aggrey Bagiire, commended EGNOS for considering Uganda as worthy hosts.

Speaking on behalf of the CAA Managing Director, the Director Air Navigation Services, Mr. Richard Ruhesi, said that as part of the Africa-EU long term strategic partnership to enhance safety in air transport, a project called Satellite navigation services for African Region (SAFIR) was started to build capacity in the region.

CAA Uganda was a pioneer in the formation of the Africa program and indeed participated in the initial trainings under SAFIR. Uganda has actively participated in most of the EGNOS activities in Kigali, Dar es Salaam, Nairobi and Dakar among others.

A number of former CAA technical staff including Ms. Agnes Kobusingye and Mr. Alex Wanda were integrated into the EGNOS Africa Program and are now working as CNS experts in Dakar.

In line with the global requirements in Aviation, CAA is progressively transitioning from conventional ground based navigation systems to satellite based navigation systems by embracing the next generation technologies. Uganda has so far successfully implemented GNSS procedures for Entebbe International Airport and there is optimism that the introduction of SBAS will go a long way in improving Air Navigation Services within the East African Region.

Hon. Bagiire assured participants of the Ugandan Government’s support towards any initiatives aimed at embracing the use of technology to enhance service delivery.

“My Ministry will closely follow the technical deliberations that are going to take place over the next four days and we look forward to implementation of the positive resolutions as soon as possible,” Hon. Bagiire said.

Satellite-based system procedures do not require any physical infrastructure at the airport served, but simply having satellite-based elements such as reference stations, master stations and geostationary satellites in place.  It is therefore, anticipated that this will come with reduction in capital investments and recurrent expenditure for landing instruments

The implementation of Satellite-Based Augmentation Systems in East Africa is also expected to enhance the region’s social and economic development through its benefits going beyond aviation, to impact agriculture, maritime, rail and road transport applications.

The four day meeting agreed on creation of a technical working group to develop the framework for creation of a regional module, which will take care of the roadmap for the development of the SBAS in Eastern Africa.

The meeting also agreed that JPO in collaboration with Regional Economic Corporations / States should expedite the implementation of GNSS monitoring and trial missions to assess the technical viability of the GNSS/SBAS systems. This is expected to support analysis of GNSS signal performance as part of the decision making tool for SBAS implementation.

Speaking at the closing ceremony, the CAA Managing Director, Dr. David Mpango Kakuba, emphasized the need to first engage stakeholders especially airlines who are the principal users of the airspace and for whom we are looking at enhancing efficiency in service provision through adoption of modern tried and tested technologies.

He added that CAA treasures the input of stakeholders and this is a vital component in implementation of any new project.

“I have been reliably informed that the preliminary cost benefit analysis indicates that the benefits of implementing the Global Navigation Satellite Systems (GNSS) and satellite – Based Augmentation System (SBAS) exceed the initial investment costs in all considered systems. This is good news for the industry,” he said.