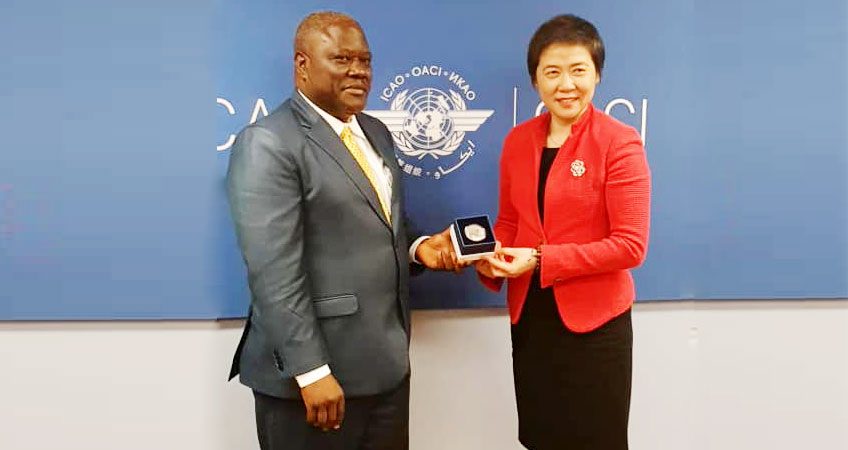 Following an outstanding performance in the Universal Security Audit Programme – Continuous Monitoring Approach (USAP-CMA) conducted by the International Civil Aviation Organization (ICAO) in 2017, Uganda has received an ICAO Council President Certificate in Aviation Security at a special ceremony at the ICAO Headquarters in Montreal during the 40th Session of the ICAO Assembly running from September 24 – October 4, 2019.

The ICAO Council President Certificate in Aviation Security, which was established in support of ICAO’s “No Country Left Behind” initiative, was received at a colorful ceremony at the ICAO Assembly on September 24, 2019.  Uganda’s delegation is led by the Minister of State (Transport), Hon. Aggrey Bagiire.  The delegation also comprises the Uganda Civil Aviation Authority (UCAA) Board Chairman, Eng. Edward Mike Ndawula and Director General, Prof. David Kakuba, among others.

“I am pleased to inform you that, in recognition of your State’s progress in resolving aviation security oversight deficiencies and improving the Effective Implementation of applicable ICAO Standards and Recommended Practices (SARPS), your state has been selected to receive an ICAO Council President Certificate in Aviation Industry.

The eligibility criteria used for this recognition are objective and transparent and are based on the results of the ICAO Universal Security Audit Programme – Continuous Monitoring Approach (USAP-CMA) activities”, an earlier letter to UCAA’s Director General from the ICAO Council President, Dr. Olumuyiwa Benard Aliu stated.

Uganda scored 81.8% in the most recent ICAO USAP-CMA audit conducted in 2017.  This was well above the global average of 73% and the African and Indian Ocean (AFI) states average of 58%.