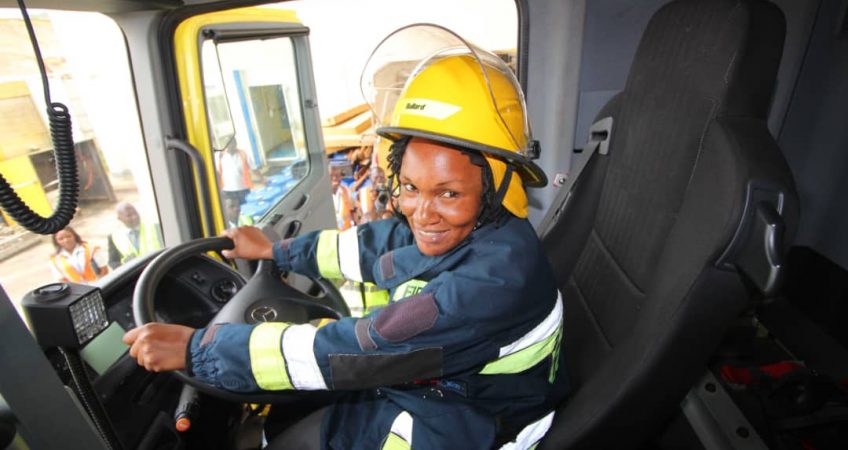 Historically, firefighting has been a predominantly male dominated profession throughout the world. However, since the 1970s, women have made broken barriers in both professional and volunteer fire departments across the world.
In modern times, women have served in a various fire service roles such as fire chiefs, although they comprise less than 20 per cent of firefighters, even in countries where they are best represented.

At 9.7 per cent, Joseph Mugisha the Director of Police Fire Prevention and Rescue Services says Uganda’s female firefighters form an even smaller fraction than what can be found at the global stage. Mugisha says Uganda has a total 601 fire fighters and of these, only 58 are female.
The Uganda Civil Aviation Authority (UCCA) has only nine women in the firefighting department and one female in marine department. Just like medics, their role is to save lives and they go where everyone wouldn’t dare to go.

Her dream was to become a lawyer but her parents could not afford to pay for a law course at university. Zainab Kampi, a mother of three, has been firefighter with experience spanning nine years at Entebbe International Airport.
She pursued a Bachelor of Arts in Education at Makerere University on government sponsorship and graduated in 2007. Just like other graduates, Kampi started searching for teaching jobs in various schools and her first salary as a teacher was Shs100,000, an amount that could hardly pay even a quarter of her monthly bills.

“In 2009, after several failed attempts at getting reasonably good jobs, I landed on a job advert at UCCA in the Newpapers and I applied. Luckily, I got the job,” she says.
Although she was excited about the new and a better paying job, Kampi harboured some fears. First, she was putting her life at the frontline and she had to be on duty anytime of the day or night.

“After my first training in basic rescue and firefighting course, I came to terms with the fact I was signing up for a strange job. I was introduced to new technology, new equipment, appliances and driving of a fire truck,” she recollects.

Duties of a firefighter
According to Kampi, firefighters are the first respondents to a disaster call. “Our duty is to save lives and people’s property. We provide rescue in dangerous situations,” she says.
She added that firefighers also respond to emergency calls by extinguishing fires. Seh says: “We sensitise people about fire safety, inspect building for fire safety and enforce safety standards.”
Other duties include performing varied maintenance tasks on apparatus, equipment and facilities, providing first aid to injured persons on board including ambulance transportation.
Firefighters also carry out physical, academic trainings and offer practical drills. “Knowing your equipment or appliance leads to effectiveness and efficiency during operations. This job warrants alertness combined with remarkable physical and mental strength,” she says.

Challenges encountered
Over the years, Kampi has found passion in firefighting and she enjoys her job. She, however, says lack of familiarisation of the aircrafts,which land at the airport is one of the challenges she has encountered.
She says: “It’s not easy to get access to aircrafts, yet as a fire fighter, I must know hazards that may present during an aircraft emergency.”
Firefighting is technical skill that requires hands-on training. As a firefighter, she says she constantly finds herself rushing to places where she might get injured or killed.
“It is the world of the unknown but we are trained to be optimistic about saving lives and minimising destruction of property,” she says.

Worst moment
“During a night duty, two of my colleagues got an accident at about 10pm. They were delivering fire cover to the aircrafts that were refueling at Apron 1. No sooner had they reached than their fire truck got stuck in a trench,” she says.
When she rushed down stairs, she says she found her colleague kneeling, sweating profusely and could not walk. “He was only pointing at the fire truck. He lay down but seemed lifeless. Blood was oozing out of his mouth and nose, he got a deep cut on his head and lost his teeth. They were rushed to hospital and thankfully, they survived,” she narrates.

Incidents she has handled
“In January 2019, in the wee hours of the night, an Ethiopian Airlines, B737-800 from Addis Ababa to Entebbe overshot the runway, skidded off the runway by a few metres. The passengers on board were 139 including the crew.
The alarm rang, the crews mounted the fire trucks and ambulance to the scene which were strategically positioned just in case of a fire. The passengers and the crew safely disembarked off the plane and were taken to the terminal. There was no damage to the aircraft but the fire crew was on standby until the aircraft was towed to the apron,” she says.
The second incident happened when she was manning tarmac duties for night shift. “Fuel was leaking out of an aircraft uncontrollably. The fuel filled the ground where the aircraft had parked. This aircraft was ready for takeoff when this incident happened. I informed the duty officer and flashed the spillage with foam to prevent any fire outbreak,” she recalls.