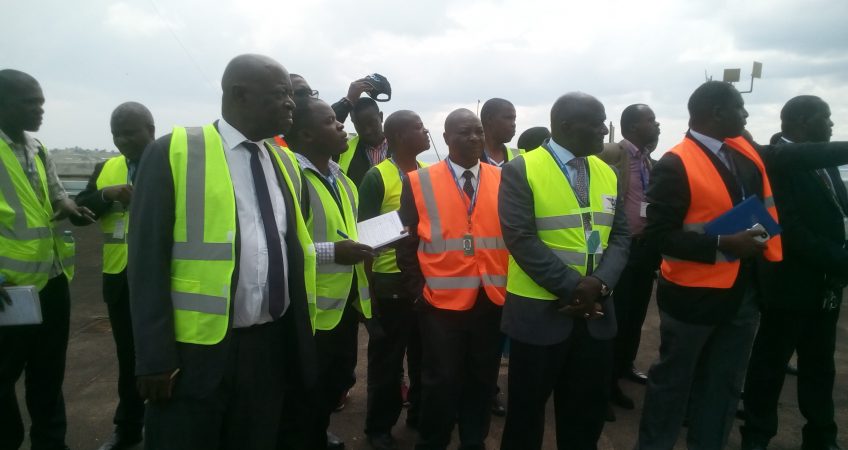 The Minister of the State Works, Hon. Gen. Katumba Wamala inspected on-going works for upgrade and expansion of Entebbe International Airport (EIA) with a team from the Joint Transport Sector Review and expressed satisfaction with the progress on Wednesday, 29 August, 2018.

“Entebbe International airport plays an important role in promoting tourism, trade and leisure travel. This is the best time to say positive things about our country because passenger experience is going to improve significantly with the upgrade of our airport,” Hon. Wamala said.

“This expansion project is at the heart of Government’s National Development Programme, which I believe is in tandem with the CAA 20 year Master Plan. I am particularly pleased to see Government’s commitment to making flying accessible for all through the introduction of the national carrier, which is coming at the right time when the airport is being expanded,” he added.

Dr. David Kakuba, who guided the Minister and his team during the tour said, “Departure Immigration counters have most recently been modified by China Nanjing International Limited to increase their number from six (6) to eleven (11). Two booths with four (4) counters and another booth with three (3) counters to accommodate a total of 11 Immigration Officers have been successfully installed. The queuing space, which was originally 101 square meters is now 209 square meters.”

Earlier on in 2017, the same contractor modified Arrivals Immigration counters and their number was increased from 14 to 20. This has since enhanced efficiency in service provision and drastically reduced on long queues at peak time. In the Arrivals Hall, one of the counters has been specifically dedicated to handling passengers with special needs, crew, business and first class passengers.

“Works for rehabilitation and strengthening of the old runway 12/30 commenced in May 2018 and are expected to be completed by the end of 2018. The works are undertaken by China Communication Construction Company (CCCC), which is also handling the on-going construction of a new 100,000 tones capacity Cargo Centre, “ he said.

Works for modification and expansion of the passenger terminal building are also on-going and are at 30% level of completion. They are being undertaken by Seyani Brothers (U) Ltd.

The visiting team was further informed that phase two of the expansion of the long term car parking was completed earlier on and it involved creation of additional capacity to park 140 cars to increase the total Long Term Car parking capacity from 260 to 410 cars. The work was undertaken by Energo Uganda Co. Ltd.

Air Traffic services management system and Air Traffic Control Radar were upgraded and this led to migration from use of manual to automated electronic strips. It also extended the ATC Radar’s serviceability lifespan by another ten years.

Aeronautical Information Management System at Entebbe International Airport was automated and this has enhanced efficiency through saving time, reduction in costs incurred by air operators and ability for pilots to file flight plans from anywhere using any web enabled device.

Improvement of air navigation services and automation of Entebbe International Airport by the Korea International Cooperation Agency (KOICA) as part of a USD 9.5 Million grant to Uganda from the Government of South Korea.

The three year project commenced in March 2016 and Uganda has on its part come up with counterpart funding of approximately USD 250,000 (per year) towards Implementation of the project that is expected to be fully delivered by the end of 2018.

A new Terminal Operations Control Centre has already been put in place at Entebbe International Airport and a training facility fully equipped at the CAA Head Office.

The Managing Director hinted on proposals to amend the CAA Act, which were developed and are before Parliament’s Physical Infrastructure Committee awaiting adoption by Parliament. “The proposed amendments are aimed at ensuring harmonization of Uganda’s regulations and practices with the universal practices across the globe. The current Act has been in place since 1991 and while it has ably guided the industry, a number of practices have since changed, which called for an update,” he added.