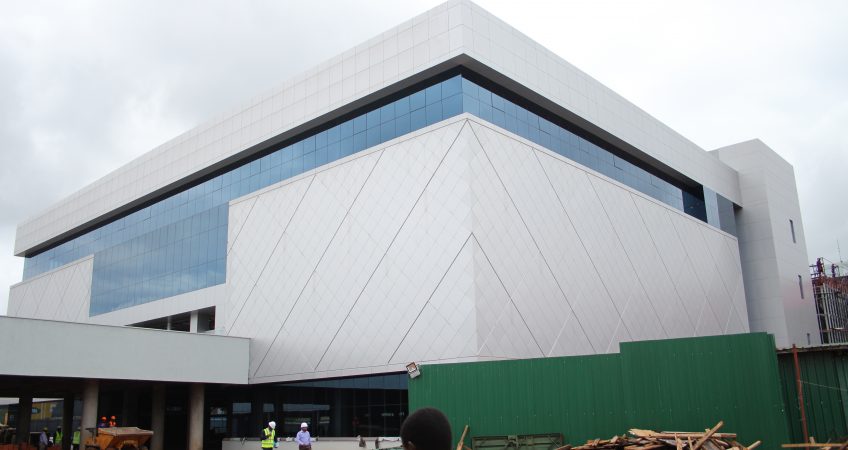 The Uganda Civil Aviation Authority (UCAA) Director Airports & Aviation Security Mr Ayub Sooma has said the new extension to the arrivals and departures lounge will help to reduce congestion at the Airport.

“The remodification of the passenger building is intended to solve issues of arrival and departure, today our rivals and departures are congested and also don’t give a good feeling to both arriving and departing passengers” he said.

Mr Sooma made the remarks during a tour of ongoing expansion works at Entebbe international Airport by state minister for transport Ms Joy Kabatsi on Thursday.

Mr Sooma said although the new building is not complete the Authority will use the top floor to facilitate departures of delegates in the upcoming G77 + China Summit from 17th to 19th April 2020 that is to be hosted in Uganda.

Min. Joy Kabatsi leaving the new terminal building at Entebbe International Airport
“We are going to make the departures it will not be complete but it will be in a usable form for the delegates to use in the departures areas only, we are almost completing once they finish putting in air conditions they are going to put the ceiling and its done. We are targeting the end of this month at least March for the usable space and after carry out the second phase of the completion” he said.

The UCAA chairman board of Directors Mr Mike Ndawula said the authority is working closely with the national organizing committee (NOC) for the summit which is expected to be attended by over 100 Presidents and 1000 delegates to ensure that the airport related needs for the delegates are met.

“Entebbe International Airport will be a major entry and exit point for all the delegates, which calls for meticulous attention to detail in order to ensure smooth facilitation on arrival and departure” he said.

The state minister for transport Ms Joy Kabatsi said UCAA has to be mindful of it’s expected facilitation role to execute as the country hosts international conferences to avoid prolonged inconveniences to passengers and users of the services and facilities at the airport.

“Conferences of this nature contribute to growth in passenger traffic figures which ultimately translate into increased revenue for UCAA. Ongoing infrastructural upgrade projects that are expected to be delivered to facilitate this and similar conferences in future ought to be expedited” he said