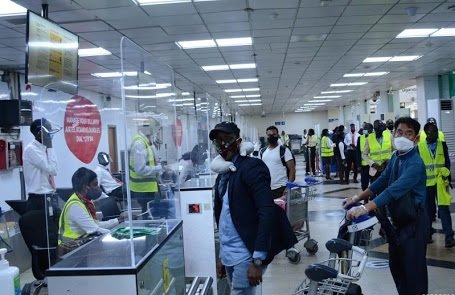 KAMPALA — The Members of Parliament on the Committee of Physical Infrastructure have described as ‘excellent, the expansion works being done at Entebbe International Airport.

The MPs made these comments during a working visit to the Uganda Civil Aviation Authority (UCAA) where they assessed the progress of the Entebbe International Airport rehabilitation phase (1) project.

“Judging by the quality and progress of work, it’s clear, we have seen value for money,” said Committee Chairperson Mr. Robert Kafeero Ssekitoleko.

Ssekitoleko said that all members were impressed by the quality of work and said his committee is very ready to fund the Entebbe International Airport rehabilitation phase (2) project.

“We have invested heavily in the first [rehabilitation] phase and we have to finish this by availing funds for phase two works,” he said, noting that “we are satisfied with the money given to UCAA”.

The committee approved the allocation of UGX 149.6 billion to UCAA in the financial year 2020/2021 as counterpart funding for the project.

The first phase worth UGX 1.1 trillion was driven by the rising number of passengers and cargo volumes handled at the airport and the need to improve customer experience, safety, security and comply with regulations.

The Committee was appraised on the importance of the project by UCC chief engineer — Herbert Ngobi who revealed that the overall completion of the upgrade and expansion stands at 79%.

He also noted that the construction of the new cargo center is at 90 percent.

The centre is expected to handle 100,000 tons of cargo every year. It will also have house cooling facilities, auxiliary business outlets and a freight forwarder’s parlour. It is projected that the cargo volumes will increase to 172,000 tons by 2033.

UCAA acting Director General Fred Bamwesigye said all these successes have been registered amidst the difficult situation of COVID-19.

He said that the pandemic has impacted aviation operations to the extent that commercial aircraft movement reduced from 32,798 in 2019 to 14,437 in 2020.

This means, on average, the airport used to handle about 89 movements per day in 2019 which reduced to an average of about 39 per day in 2020.

“While in the beginning, [October-December], we allowed only one flight per airline per day, since January 2021, two flights have been permitted per airline per day and those with traffic have an opportunity to even increase the frequency,” Mr. Bamwesigye told MPs.