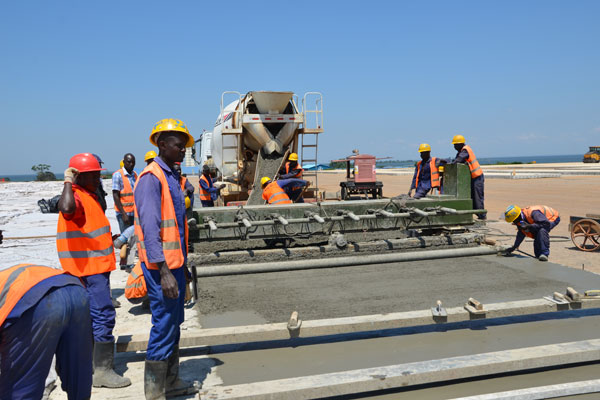 The ongoing expansion works at the Entebbe International Airport are part of the 20-year master plan being carried out by the Civil Aviation Authority (CAA), running from 2014 to 2033. In the first five years of the project, a number of projects have already been embarked on.
The expansion projects follows a study in both the passenger and cargo growth trends at the airport.
Mr Vianney Luggya, the authority’s spokesperson, says there has been a steady increase in passenger traffic transiting through the airport, necessitating the expansion of the airport facilities.

“Last year (2017), we had 1.6m international passengers compared to 118,000 in 1991 when CAA was established, and we are expecting these numbers to grow further according to our master plan,” Mr Luggya says.
On cargo growth, he says in the year of the authority’s inception, it recorded 6,600 tonnes of cargo for both import and export, but by end of 2017, the numbers had grown to 59,000 metric tonnes.
“As a result, it was deemed prudent that we expand our services and facilities at the airport so that they can match with the growth trends and demand,” he says.

Internally funded projects
CAA conceived a number of expansion projects to be worked on during the designated period, some of which are funded by CAA’s internally-generated funds, while others are externally funded. According to Mr Luggya, the internally funded projects are mostly focusing on decreasing congestion at the airport.
“At peak hours between noon and 3pm there is some congestion at both departure and arrival halls. Under the internally funded projects, we are increasing the counters in both halls. In the arrival hall, we have modified and increased the counters to 20 from 14. This will not only improve service delivery, but also shorten the passenger processing time. In the hall, we have dedicated one counter to passengers with special needs such as pregnant women, children, crew, and people with challenges.”
The departure hall will also see the number of counters increased to 11 from the current six. The work of improving the departure and arrival halls is being carried out by Chinese company Nanjing. “With increased counters, there will be improved quality service delivery,” says Luggya.
The modification and expansion of the passenger terminal building is being carried out by Seyana Brothers Uganda Limited at a cost of Shs42b. Funding for this work has been provided by CAA from its internally-generated funds.
Once completed, the driveway to the departure will be reinstated, allowing travelling passengers to be dropped at the departure terminal.

Besides the ongoing Seyani Brothers’ project, there has been the completion of the expansion of the airport’s long term parking space. “We have increased the parking space to cater for 410 from 260 cars,” Mr Luggya says.
There are other projects that have been carried out to improve service delivery at the airport but not visible to the travelling public. Such projects include the automation of the aeronautical information management systems at the airport. The system enables pilots to file their flight plans with airport control ahead of their flights.
“This enhances efficiency and reduces costs on the side of the air operators and ensures faster communication,” says Mr Luggya.
Another improvement is the upgrading of the air control radar, integrating it with modern technologies to enhance efficiency and quality service delivery.

Externally funded projects
There are two models for the externally funded projects that are ongoing at the Entebbe airport. One is a grant from the Government of Korea of $9.5m (Shs34.8b) for the automation of systems at the airport. The three-year project commenced in 2016 and it is not a cash grant, but in form of equipment worth $9.5m for the airport’s automation.
The government contributes $250,000 (about Shs900m) every year towards the programme as counterpart funding.Under this grant, a service control centre has been equipped and installed at the airport.
“The centre will improve air navigation services, and also under the same grant, we shall get a computerised management system, which will enable our technicians to detect any fault at the airport with a click of a mouse other than having to look for them manually,” Mr Luggya says.

The mega project
Of all the projects going on at the airport, the biggest is the $200m (Shs734b) five-year project being implemented by the China Communications Construction Company (CCCC).
Funded by a Chinese Exim Bank loan, the project has different components, including the construction of a new cargo terminal, access roads to the new cargo terminal, a new taxiway for the cargo planes and their aprons, extension of the current airplane parking spaces, strengthening the existing runway, among others.
The first phase of this project, which commenced in 2016, is the construction of the new cargo centre.
“Once completed, it will provide capacity for 100,000 metric tonnes but with a possibility of adjusting it to take up to 150,000 metric tonnes if the need arises compared to the current centre, which has a capacity of 69,000 metric tonnes,” Mr Luggya says.
The centre, which is away from the main terminal, will have its own plane parking aprons and taxiway.

Mr Luggya adds: “Because it’s being built away from the main airport, we are putting up new access roads as well and 80 per cent of the roads are completed.”
The cargo terminal, airplane apron and the access roads, are all at different levels of completion.
However, much of the work on the cargo terminal building is being done off site. It is more of a prefabricated building.
For the taxiway, which Mr Luggya says is named Taxiway Alpha, 32 per cent of the work has been completed.
Everything to do with the new cargo terminal will be completed by the end of this year.
Besides the cargo centre, works are ongoing for the expansion of the passenger plane apron to provide more 11 plane parking spaces.
Once the cargo centre is competed at the end of the year, the old one will be brought down and in its place the same contractor, (CCCC), will commence the construction of a new passenger terminal.

New feel
“When the first phase is competed in 2021, travellers through Entebbe airport should expect ambient service and facilities. User comfort is what we are focusing on in our expansion plan,” Mr Luggya says.
On completion in 2021, the new passenger terminal will have the capacity to handle 3.5m passengers a year, compared to the current with two million.
“For us as air travel regulators, we are focusing on the expected growth in passenger numbers that is likely to come with the revival of the national airline. What we are putting in place is to attract more international airlines of repute,” Mr Luggya says.
The $200m loan from China is to be repaid in 20 years.
“There shouldn’t be any worry on the payments, the benefits accruing from this loan are immense for the country and the people at large.”