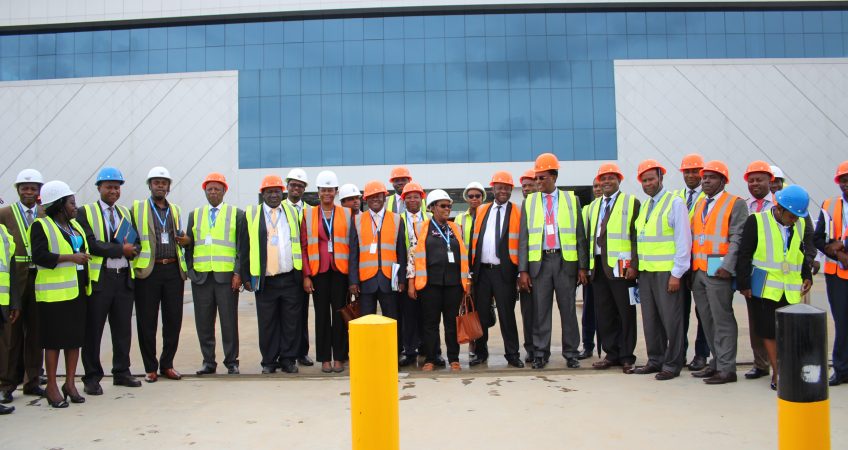 ENTEBBE – State Minister of Transport Joy Kabatsi, visited Entebbe International Airport on Thursday, February to stand on the latest preparations of receiving the G77+China delegations slated to come to Uganda in April.

Minister Kabatsi flanked by journalists and ministry officials also inspected the new departure and arrival halls at the airport and checked on all the security measures inside and outside the airport including the UCAA’s readiness to provide the necessary parking for over 100 presidents and thousands of delegates expected to participate in the major event.

Kabatsi, however, defended the delay in completion and handing over the new cargo terminal centre which was due for completion in December 2019 citing unforeseen circumstances but urged the engineers to speed up the work to reduce congestion of people and their baggage.

Eng. Ayub Sooma, the Director and Aviation Security explained that the alternation with the expansion plan and change in weather conditions affected the scheduled completion time but “we are taking necessary measures to have them completed very soon”

“Our arrivals and departure sections do not give a good feeling to the arriving passenger when entering the country and those departing….we have put up remodification and the terminal building to give a good feeling and elegance,” he said assuring the minister that “we have eased the ways people depart and arrive”

He said the new terminal building is purposely to solve security issues that the current format was not solving.

Dr. Kakuba also gave updates on the progress and timelines.

Works for modification and expansion of the passenger terminal building are also on-going and are over 80% level of completion.

Other works include improvement of flight procedures efficiency through Air Traffic Management, establishment of a modern terminal operations control center that has already been installed at the airport and a training facility at the CAA Head office.

He divulged that the authority has expanded the long term car parking from 240 to 410 parking slots and increased departure immigration counters from 6 to 11 and improved the area ambiance.

The upgrade and expansion project forms part of a 20-year National Aviation Master Plan (2014-2033) unveiled by the Civil Aviation Authority of Uganda (CAA) in January 2015.