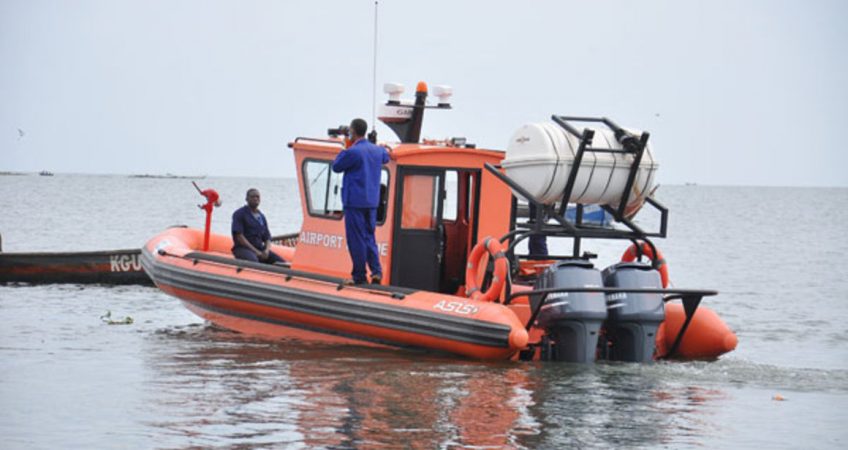 Unlike the previous boats, the new Rigid Hull Foam Pontoon boat is mounted with fire-fighting muzzle. Photo by Julius Luwemba
The Uganda Civil Aviation Authority (UCAA) unveiled a new marine rescue boat which was procured at sh1.4b, bringing to a total of four marine rescue boats currently owned by the aviation authority.
The new Rigid Hull Foam Pontoon manufactured by Asis, a Dubai-based boat company, was launched onWednesdayat one of UCAA’s marine piers.

Eng. Ayub Sooma the director for airports and aviation security noted that the new rescue boat uses state-of-the-art technology and can rescue up to 50 people in case of any accidents.
“It has the Global Positioning System (GPS), echo-sounder, beat-locator and a water pump which is manually operated to put out a fire in a distance of 9.5metres,” described Sooma, adding that the new boat, like the other three, has an engine capacity of 500 horsepower and can travel at a speed of 50 notes.

Asis Boats’ Ibrahim Rizk (right) with Eng. Ayub Sooma (2nd right) handing over a certificate to Solomon one of the trainees as UCAA’s Emmanuel Barungi (left) looks on. Photo by Julius Luwemba
Each of the other three (3) rescue boats has more than three life-rafts which could rescue a total of 400 people in case of any accidents.
“As the industry grows with advances in technology, fire-fighting and marine rescue operations have become more sophisticated and challenging, hence a need for UCAA to continuously train personnel and have equipment that is up to the task,” further explained Sooma.