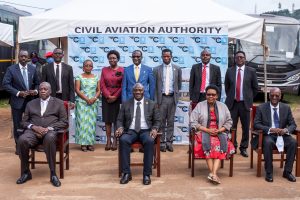 The Minister of Works and Transport, Hon. Gen. Katumba Wamala, on June 24, 2020, inaugurated a new Board of Directors to oversee the performance of the Authority. Justice Steven Kavuma is the new Chairman of the Board of Directors taking over from Eng. Edward Mike Ndawula.

His appointment and that of the other Board Members was announced on June 3, 2020 following the approval of the appointments by Cabinet. The inauguration ceremony, which also doubled as a farewell to the out-going members of the Board in recognition of services rendered in the last three years was held at the Ministry of Works and Transport’s Central Mechanical Workshop.

The other new members of the Board are Mr. Lubowa Moses Paul, Ms Ethel Kamba, Dr. Alayo Ocero and Mr. Thomas James Kiggundu. Board Members who served on the last Board and were returned are Hajji Zubair Musoke, Mrs. Angela Kiryabwire Kanyima and and Mr. James Kubeketerya. The Board’s term of office is three years.