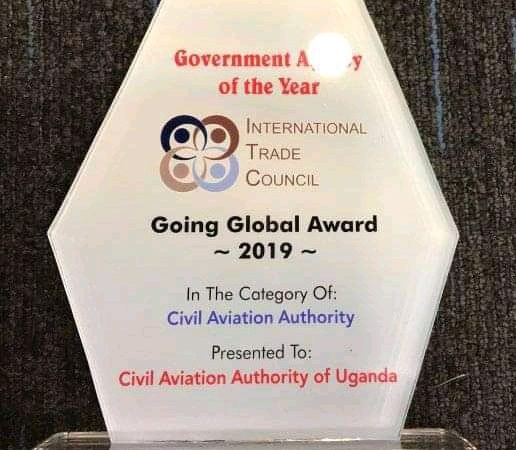 The Uganda Civil Aviation Authority (UCAA) has been crowned winner of the ‘Going Global Award 2019’, after it was recognised by the International Trade Council as the Government Agency of the year in aviation.

This award comes a month after the International Civil Aviation Organisation (ICAO) recognised Uganda with the ICAO council president’s certificate for efforts in resolving aviation security deficiencies at the ICAO Assembly in Montreal Canada on September 24, 2019.

UCAA publicist, Mr Vianney Luggya says the award is in recognition of the customer care, infrastructural improvement, training of staff and contribution towards supporting tourism and Agricultural exports facilitated through Entebbe international Airport.

“It was received by the Authority’s Manager for Marketing and commercial services Dr Tom Davis Wasswa in Chicago USA on October 23, 2019.”

The ICAO Award was in recognition of an outstanding performance in the 2017 Universal Security Audit Program continuous Monitoring Approach (USAP-CMA) in which Uganda scored 81.8% above the global average of 73% and the African and Indian Ocean States average of 58%.

UCAA has for the last four years been engaged in the upgrading of the institution of modern facilities including a new cargo centre and fuel reservoirs which will greatly improve Aviation Security and safety.